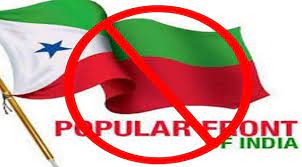 The Central Government on Wednesday announced the ban on Popular Front of India and its associates for the period of five year alleging it to be involved in a series of violence and has “links” with global terror groups like ISIS.

“…in exercise of powers conferred by sub-section (1) of section 3 of the Unlawful Activities (Prevention) Act, 1967 (37 of 1967), the Central Government hereby declared the Popular Front of India (PFI) and its associated or affiliates or fronts including Rehab India Foundation, Campus Front of India, All India Imams Council, National Confederation of Human Rights Organization, National Women’s Front, Junior Front, Empower India Foundation and Rehab Foundation, Kerala, as an ‘unlawful association’,” reads the gazette the notification  issued by the Govt of India.

More than 150 people allegedly linked with PFI were detained or arrested in raids across seven states on Tuesday, five days after a similar pan-India crackdown against the 16-year-old group had led to the arrest of over a hundred of its activities and seizure of several dozen properties.

The notification said PFI and its associates or affiliates or fronts have been indulging in unlawful activities, which are prejudicial to the integrity, sovereignty and security of the country and have the potential to disturb public peace and communal harmony of the country and support militancy in the country.