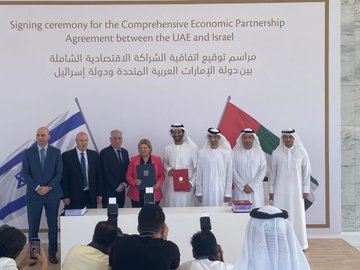 Israel and the United Arab Emirates signed a free trade agreement on Tuesday, Israel’s ambassador to the UAE, Amir Hayek, said on Twitter.

The UAE and Israel formally established relations in 2020 as part of the US-brokered Abraham Accords that also included Bahrain and Morocco. The trade deal is Israel’s first with an Arab country.

According to Al Arabiya, The trade agreement includes 95 percent of traded products, which will be customs free, immediately or gradually, including food, agriculture and cosmetic products, as well as medical equipment and medicine, the Israeli Economy Ministry said in a statement in April, after negotiations were being discussed.

India Joins US, Other Countries To Launch ‘Inclusive And Flexible’ IPEF

India-China Military Talks ‘Inconclusive’ As ‘Chinese Side Was Not Agreeable’