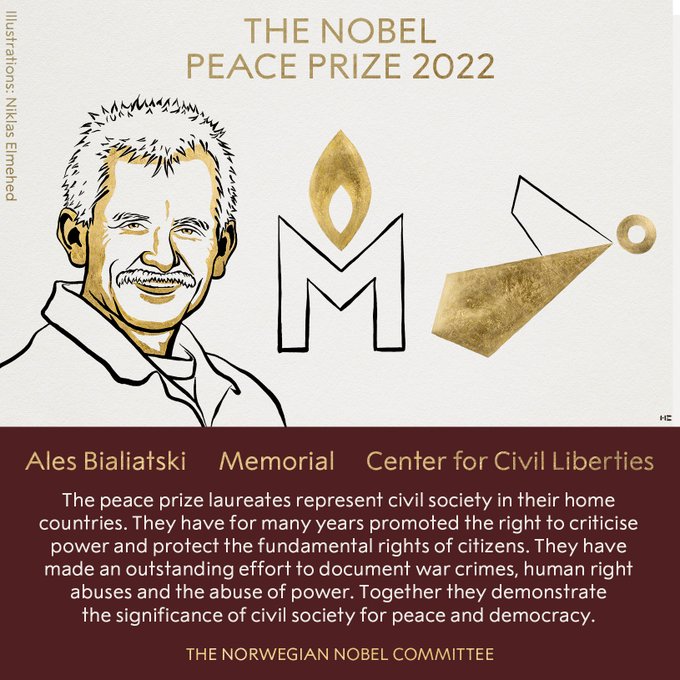 Ales Bialiatski – awarded the 2022 #NobelPeacePrize – was one of the initiators of the democracy movement that emerged in Belarus in the mid-1980s. He has devoted his life to promoting democracy and peaceful development in his home country.

He founded the organisation Viasna (Spring), in 1996. Viasna evolved into a broad-based human rights organisation that documented and protested against the authorities’ use of torture against political prisoners.

Government authorities have repeatedly sought to silence Ales Bialiatski. Since 2020, he is still detained without trial. Despite tremendous personal hardship, Mr Bialiatski has not yielded an inch in his fight for human rights and democracy in Belarus.

The 2022 Nobel Peace Prize laureate and human rights organisation Memorial, was established in 1987 by human rights activists in the former Soviet Union who wanted to ensure that the victims of the communist regime’s oppression would never be forgotten.

Memorial is based on the notion that confronting past crimes is essential in preventing new ones. The organisation has also been standing at the forefront of efforts to combat militarism and promote human rights and government based on rule of law.

The Center for Civil Liberties – awarded the 2022 Nobel Peace Prize  was founded for the purpose of advancing human rights and democracy in Ukraine. It has taken a stand to strengthen Ukrainian civil society and pressure the authorities to make Ukraine a full-fledged democracy.

After Russia’s invasion of Ukraine in February 2022, the center has engaged in efforts to identify and document Russian war crimes against the Ukrainian population. The center is playing a pioneering role in holding guilty parties accountable for their crimes.

Thailand Shooting: Gunman Kills 34, Including 22 Children Before Killing Family, Self