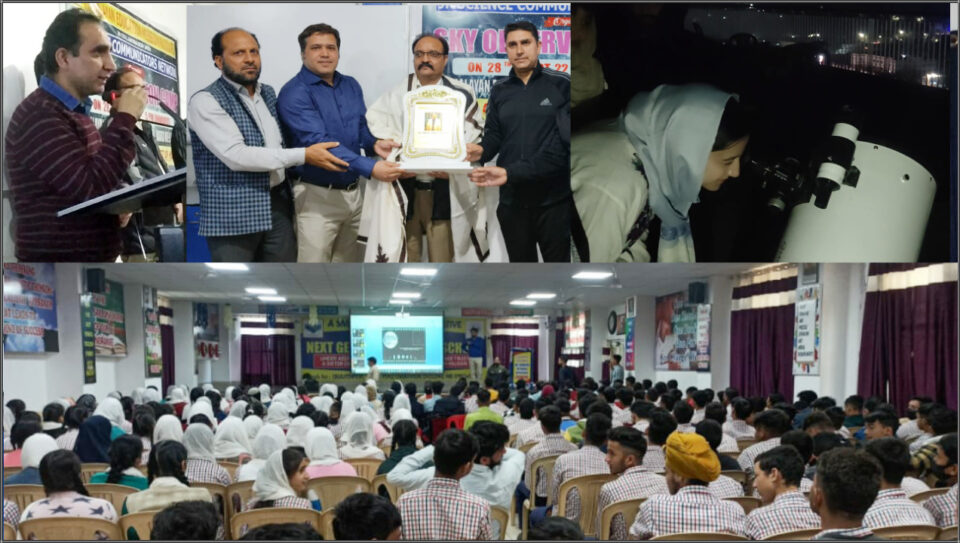 In an unprecedented move to facilitate the youth especially students for developing a higher scientific temper and a better understanding of astronomical objects, the Himalayan Education Mission organised a two-day sky-watching programme and a scientific workshop in the western town of Rajouri of Jammu and Kashmir Union Territory.

This first-of-its-kind event was organised in collaboration with JK Science Communicators Network for students both at the Rajouri campus and Dhangri campus of the mission.

In their presidential address, ADDC Rajouri and Bilal Rashid Mir appreciated the innovative measures taken by the Himalayan Institute and JK Science communicators team for popularising science and promoting scientific temperament among the budding scientists in the backward border hilly areas of Rajouri.

The event was later joined by DIG Rajouri Dr Haseeb Mughal, who displayed a rare enthusiasm for personally watching the movements of stars and planets in open sky through high resolution telescopes engaged for the purpose.

The students candidly interacted with the team of experts from JK Science Communicators including Khurshid Ahmed, Syed Ishtiaq Ahmed, Anees Ul Islam, Muhammad Ayaz Raina, Ranjeet Kumar and asked variegated questions which were duly answered by the team in the presence of officers from Civil and Police administration which inspired and encouraged the students and created a true learning environment.

A full day activity based programme was also organised by the said team of experts at Himalayan Super School Dhangri, in which students of various lower and higher classes participated. This initiative was highly appreciated by parents, students, teachers, civil society and officers present on the occasion. The Himalayan management announced a calendar of events of such pattern to be orgainsed by the institution in the near future to make the students fully abreast with the latest audio – visual technology being used for comprehensive understanding of scientific experiments and projects.

Mr Mohd Muslim Wani co-ordinated the entire programme and also conducted the proceedings of the dais.