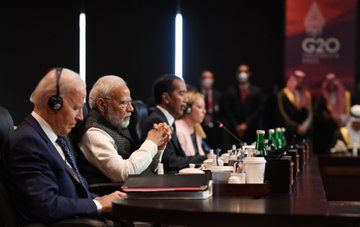 Prime Minister Narendra Modi Tuesday called for a ceasefire in the Russia-Ukraine war and stressed the importance of not promoting any restrictions on the supply of energy.

In an address at the G-20 summit here, PM Modi said that climate change, the Covid-19 pandemic, the developments in Ukraine and the global problems associated with it have caused havoc in the world and rued that the global supply chains are in “ruins”.

“I have repeatedly said that we have to find a way to return to the path of ceasefire and diplomacy in Ukraine. Over the past century, the Second World War wreaked havoc in the world,” he said. “After that, the leaders of that time made a serious effort to take the path of peace. Now it’s our turn. The onus of creating a new world order for the post-Covid period lies on our shoulders,” he noted.

India will assume the presidency of G-20 for a year following this year’s summit.

On Energy Security, Prime Minister Modi stressed on no promoting on restrictions on the supply of energy.

“India’s energy security is also important for global growth, as it is the world’s fastest-growing economy. We must not promote any restrictions on the supply of energy and stability in the energy market should be ensured,” PM Modi. India has faced criticism from Western allies for its decision to purchase Russian oil which has been boycotted by several nations following Moscow’s invasion of Ukraine in February this year.

‘Threat Has Not Reduced’, Says Indian Army Chief On Border Crisis With China