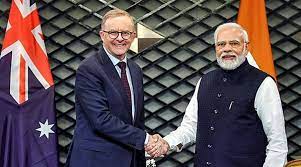 “BREAKING: Our Free Trade Agreement with India has passed through parliament,” Albanese tweeted.

BREAKING: Our Free Trade Agreement with India has passed through parliament. (📷 with @narendramodi at the G20) pic.twitter.com/e8iG3gpTgr

The announcement come days after Albanese announced his visit to India in March next year. He announced this on the sidelines of the 17th edition of the G20 summit in Bali.

“We’ll take a business delegation to India. And that will be an important visit and an upgrade in the relationship that we have between our two nations,” he added.